10 Mysterious Locations in Washington State to Explore This Summer

I want to believe! I love a good mystery, and I love weird things, exploring the unknown, or seeing something that stands out in our mundane regular life is awesome to me! And for all of those believers like me out there, I have made this list of 10 weird and mysterious locations in the evergreen state to check out this summer! But beware, who knows what you might find!

These mysterious bumps which can be found in Olympia, Wa have mystified and perplexed visitors and biologists for decades, the mounds themselves stretch for 445 acres,  the mounds can range in diameter from 3 to more than 50 meters, and in height 30 centimeters to greater than 2 meters! There are many theories as to how these mounds formed from the burrowing of pocket gophers,  accumulation of wind-blown (aeolian) sediments around vegetation to form coppice dunes or seismic ground shaking by major earthquakes and so on! But I say go, check out the 1/2 mile hike and make your own opinion! 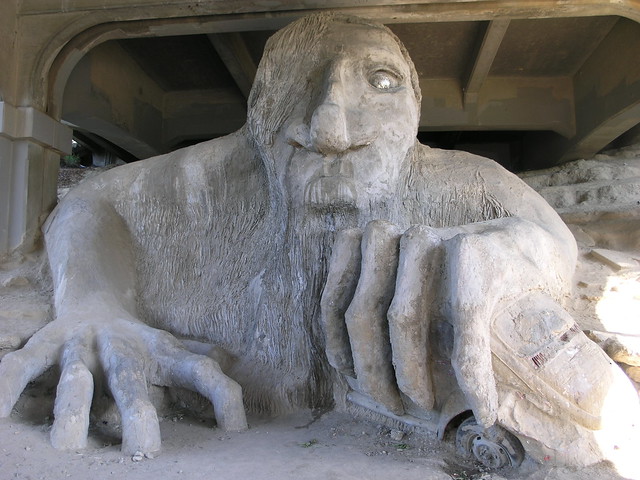 The awe striking Fremont Troll can be found hiding under a bridge in the fremont area of Seattle, Wa. The Troll was sculpted in 1990 by four local artists: Steve Badanes, Will Martin, Donna Walter, and Ross Whitehead. The idea of a troll living under a bridge is derived from the Scandinavian (Norwegian) fairytale Three Billy Goats Gruff. So not so much a mystery as it is a fantastic hidden and weird gem to be found in Seattle! 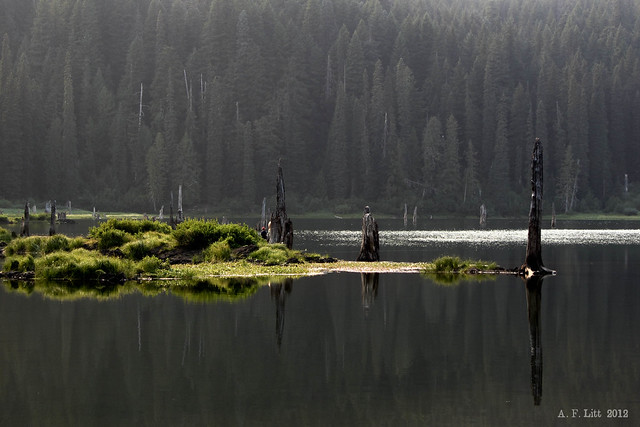 The dissapearing lake can be found hidden within the Gifford Pinchot National Forest, in a remote meadow called South Prairie — located in Washington’s Southern Cascades north of the Columbia River Gorge. As quickly as the lake arrives in spring, it will vanish almost like magic during the summer, the six to eight feet of water leaving nothing but a dry meadow behind, the current accepted theory by biologists is that lava tubes are clogged with ice during winter and into spring, creating a plug that allows the meadow to fill with water. Once the weather warms up enough, the ice melts and the water drains out.  If you go, the state authorities request you not go during the summer and trample the fragile flowers which are in bloom, so I’d recommend bring a kayake and see it in spring! 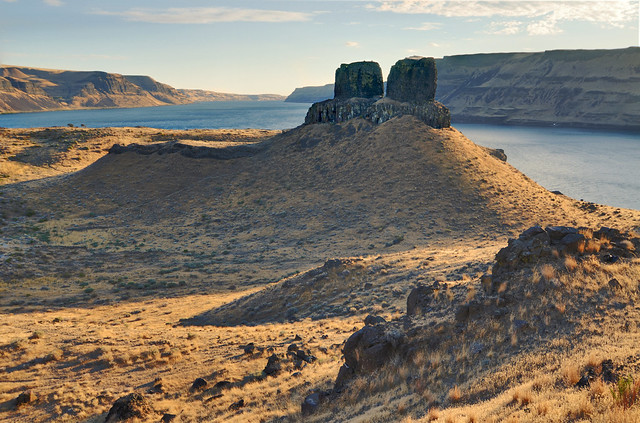 Twin Sisters is a mysterious and beautiful basalt pillar that inspired the mythology of the Wallula Gap near the Columbia River just upstream of Port Kelley, Washington. According to the Cayuse Indian tribe, the following legend recounts the origin of the rocks: “Coyote, the Trickster spirit hero of many native stories, fell in love with three sisters who were building a salmon trap on the river near here. Each night Coyote would destroy their trap, and each day the girls would rebuild it. One morning Coyote saw the girls crying and found out that they were starving because they had not been able to catch any fish in their trap. Coyote promised them a working fish trap if they would become his wives. They agreed, and Coyote kept his promise; however, over the years he became jealous of them. He changed two of the wives into these basalt pillars and turned the third into a cave downstream. He became a rock nearby so he could watch over them forever.”

5. She Who Watches(The Columbia Hills Petroglyphs) 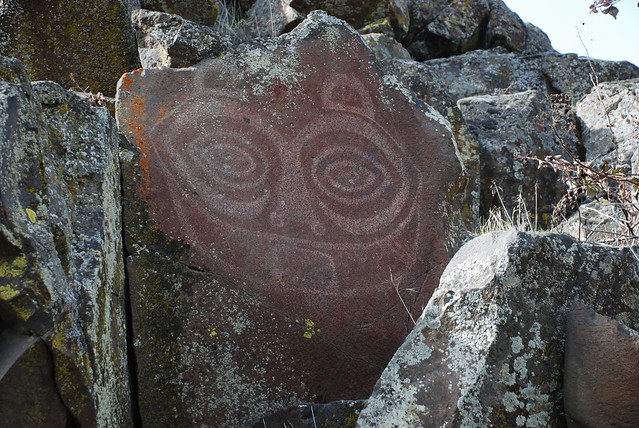 Located on the Washington side of the Columbia River Gorge near The Dalles, in the Columbia Hills State Park can be found an incredible hidden ancient gem, left behind by native americans who lived in the area, the site is also the location of many other petroglyphs. The site is open to the public, but may be currently restricted to tour guided hikes only due to vandalism on the sacred site. Someone always has to ruin it for everyone else! But if you can, definately take the opportunity to check out some local native american history! 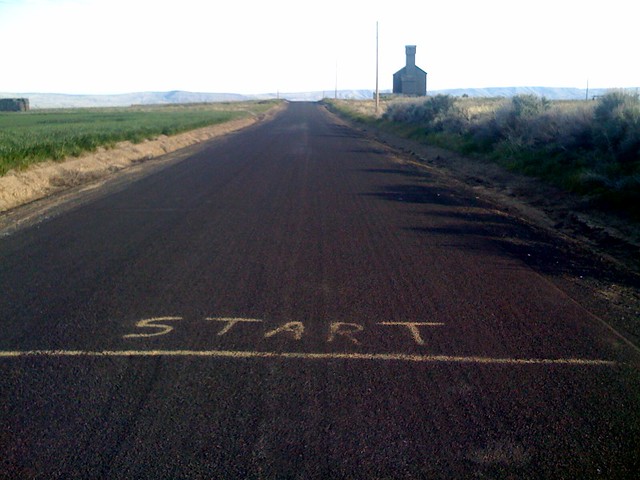 Hidden about ten miles from downtown Prosser, Wa. Can be found an extraordinary road nicknamed “Gravity Hill” painted on the ground is a start line and if you put your vehicle into neutral you will begin to roll up hill! Its incredible to experience, and although likely just an optical illusion, its still an amazing natural phenomena that should be experienced if you can find it! 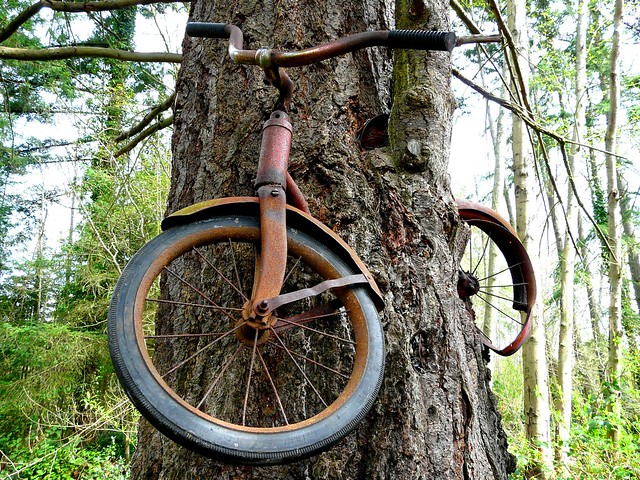 Located in the Northeast side of Vashon Island, can be found a very unique find, a tree has began eating an old bicycle! The bike is said to have belonged to a local sheriff who abandoned it there in 1955 but no one truly knows the bikes origins for sure. Unfortunately like in many other cases, humans suck and have stolen pieces off the bike so now most of it is missing, but it is still a sight worth the hike! 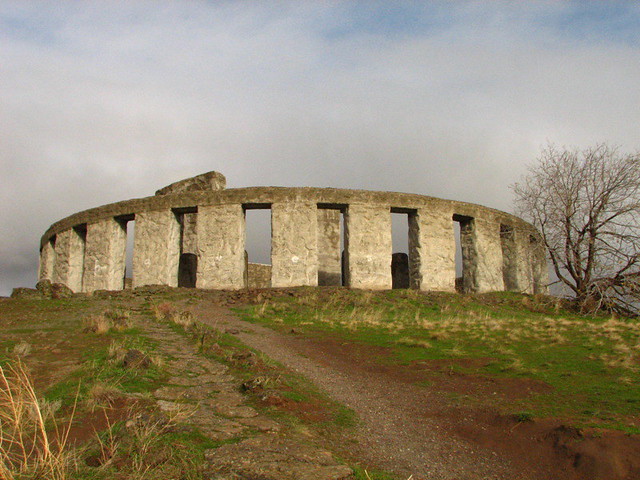 A stonehenge in the evergreen state?! Yep! Located in Maryhill Wa. in the Maryhill Museum of Art,  can be found the Maryhill Stonehenge,  a replica of England’s Stonehenge, It was commissioned in the early twentieth century by businessman Samuel Hill and dedicated on July 4, 1918, as a memorial to those who had died in World War I. The memorial was completed in 1929. Admission is free, but they do ask for donations to help maintain the museum. 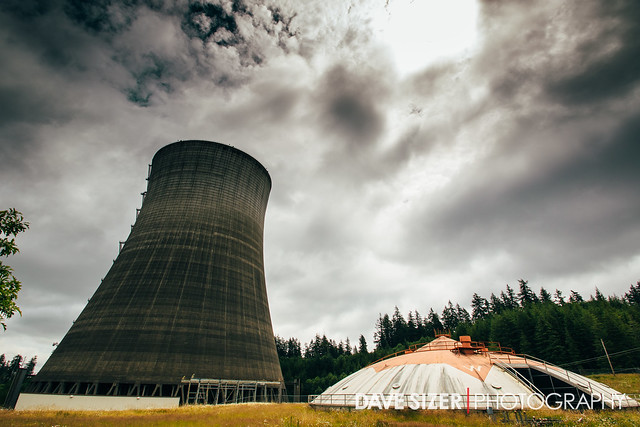 Nestled in the small town of Elma, Wa. can be found the remains of one of the largest power plant constructions in US history, costing Two billion(yes billion!) construction began in 1970 and after many cost and loan issues was shut down in 1982 leaving it unfinished and a monument to one of the most expensive mistakes in Washington state! It is now being use as an industrial center, technology campus, and workforce training center. Check it out!

This is one destination on this list that you may not be able to actually go to, since, well, no one really knows where its located (or if it even exists!) But according to urban legend, an allegedly “bottomless pit” exists near Ellensburg, Washington. Claims about it were first made on the radio show Coast to Coast AM in Feb. 21, 1997 by a guest calling himself “Mel Waters.” Later investigation revealed no such person was listed as residing in that area, and no credible evidence that the hole exists has ever been found, Waters stated the hole had infinite depth and the ability to restore dead animals to life. Waters also claimed to have measured the hole’s depth to be more than 15 miles (24 kilometers) by using fishing line and a weight. According to Waters, the hole’s magical properties prompted US “federal agents” to seize the land and fund his relocation to Australia. So although no evidence has ever been found, who knows! If you’re ever in the Ellensburg area, be sure to look around, you may stumble upon Mel’s bottomless hole!

So thats my list of 10 weird and mysterious locations in Washington state, if you like it, share it with your friends! We could all use more adventure!