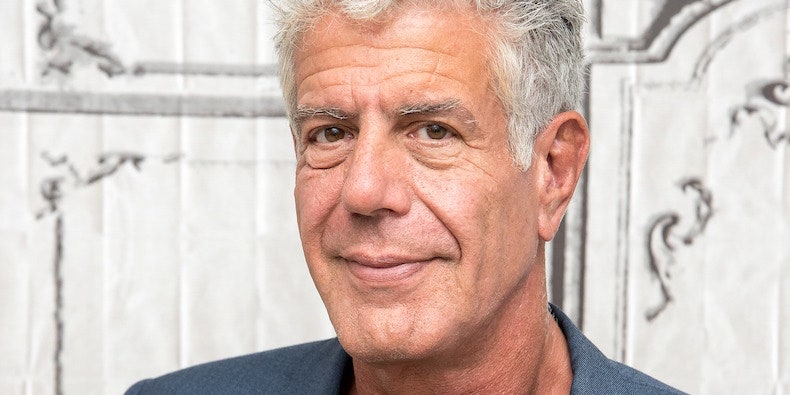 Anthony Bourdain, the celebrated television chef and presenter of “Parts Unknown,” has died, CNN reports. He was 61. Bourdain was working on an episode of the show in France when a friend found him unresponsive in his hotel room this morning, according to CNN. The network says the cause of death was suicide.

Bourdain rose to prominence in 2000 with the best-selling book Kitchen Confidential: Adventures in the Culinary Underbelly, adapted from a New Yorker article. He began hosting TV in 2002, working on food-and-travel shows such as “A Cook’s Tour” and “Anthony Bourdain: No Reservations” before “Parts Unknown.”

He was also an outspoken music fan: In 2007, he wrote for Spin about the underside of life as a punk rock fan in 1977 New York. In 2014, he spoke to Rolling Stone about the care that went into soundtracking his shows, treating it “the same way that you would score a movie, commissioning musicians rather than using tracks from a library.” For an episode featuring Barack Obama, he fought to include James Brown’s “The Boss” no matter the cost, the New Yorker reported. “I don’t know who’s paying for it,” he said. “But somebody’s fucking paying for it.” He’d often invite musicians to guest and perform on his shows—Sleigh Bells, Neon Indian, the Dead Weather, and many more. Last year, he interviewed Iggy Pop for GQ. As CNN points out, the Smithsonian once called Bourdain “the original rock star” of the culinary world—“the Elvis of bad boy chefs.”

In a statement this morning, the network wrote: “It is with extraordinary sadness we can confirm the death of our friend and colleague, Anthony Bourdain. His love of great adventure, new friends, fine food and drink and the remarkable stories of the world made him a unique storyteller. His talents never ceased to amaze us and we will miss him very much. Our thoughts and prayers are with his daughter and family at this incredibly difficult time.”